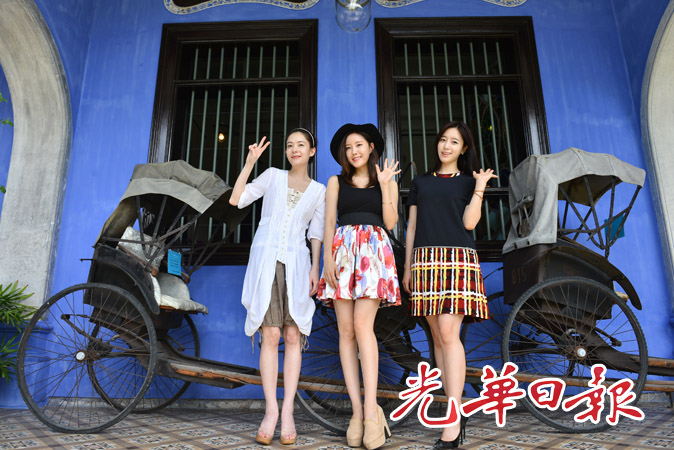 Korean girl group T-ara’s Park Hyomin and Hahm Eunjung, and Korean actress Kang Bo Bae visited Penang for the first time. They could not wait to try all the delicacies of Penang and visited the Cheong Fatt Tze Mansion (The Blue Mansion). They were greeted by the owners with Nyonya pastries and helped themselves to the food in front of various Penang media!

The three of them went to Brunei earlier to promote McSSY’s cosmetic products and came down to Penang for a short vacation. They were excited to visit Penang for the first time and decided to make full use of these few days to explore Penang’s various famous attractions.

“We used to hear that Penang is the pearl of the Eastern regions, I think that the culture here is really interesting. We are very happy to visit Penang and want to visit many attractions, like the camera museum,” Eunjung said during the interview. “I’ll be busy next month as I’ll be filming a Korean daily drama. I can’t reveal the title of the drama just yet, but I’ll be focusing more on television appearances,” Kang Bo Bae said.

The 3 of them just arrived in Penang late yesterday night, which coincides with the Mid-Autumn Festival (Chuseok/Hangawi for Koreans). They really hope to try local mooncakes (Chinese pastry, usually with lotus paste filling). “Mid-Autumn Festival is a festive day where family members gather together. Because of work commitments and schedules, we missed this chance. Nevertheless, we are feeling warm because of the company of so many fans.”

They (Eunjung and Hyomin) said that they had never forgotten the warmth and passion from their Malaysian fans. They had visited Malaysia quite a few times now and even attended the Sultan of Johor’s coronation ceremony earlier this year. This is their first time in Penang and they hope that there will more opportunities in the future for them to explore Malaysia. T-ara’s popularity is really huge. When they were in Penang, reporters and passers-by would rush to take pictures with them. Even member of state Pengkalan Kota, Lau Keng Ee transformed into a fan and took a picture with the three of them for remembrance.

On a side note, Eunjung & Hyomin have a piece of good news for Malaysian fans: T-ara is planning to hold a concert in Malaysia next year, hope the fans will look forward to it!