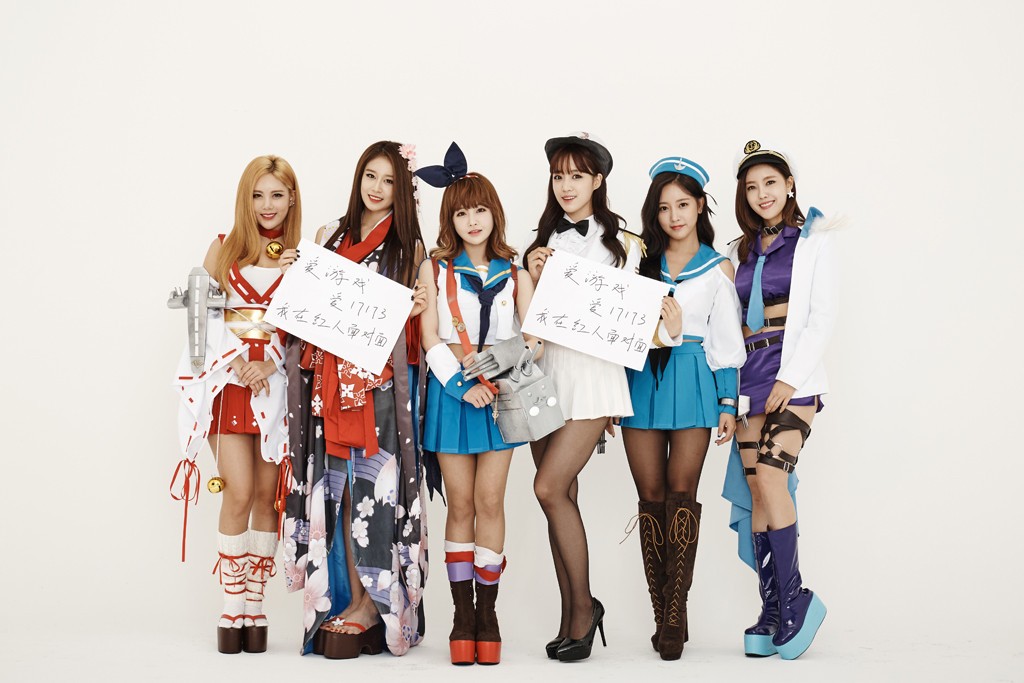 T-ara: Hello everyone~ We are T-ara. Our members are Jeon Boram, Lee Qri, Park Soyeon, Ham Eunjung, Park Hyomin and Park Jiyeon. We are really happy to meet everyone on 17173.

17173: Do you all meet up with one another outside of the usual schedules?

T-ara: Because we’re an idol group, we usually meet up even outside schedules. We play bowling, watch movies, try out different types of delicious food together, and even drive around the Han River to hang out.

T-ara: Of course we like games that have some competitive sense, because playing games alone is really boring. We also like the kind of puzzle games that you play with friends over chatting app (like KakaoTalk or Line). We can play while we chat with friends that way.

17173: You are the ambassadors of World of Warships (WOWS), a kind of war game that is more suitable for males. What do you think are your qualities that fit well with the WOWS concept?

T-ara: Because both WOWS and we are cool~ haha, actually we think Jiyeon really fits the war sailor concept. Furthermore, we really admire navy soldiers, battling on the deep blue seas with battleships. They are the protectors and upholders of safety on waters, really cool and passionate.

17173: Why did you all choose to work with WOWS? What attracted you to endorse and be ambassadors of this game?

T-ara: Actually we don’t usually play games, except when we are in the van or waiting room. Mobile games seem a lot more fun than PC games, like mobile puzzle games. But we have been playing WOWS whenever we have free time! All of us like WOWS for different reasons too. Eunjung likes the beautiful graphics, Boram likes the island terrain so she’s really immersed in the game whenever she plays. Whereas for Jiyeon, she’s really good at WOWS so she likes to play and taunt us.

17173: Many Chinese celebrities are streaming games nowadays, have you all considered to do the same?

T-ara: We have considered and would really like to stream WOWS if we have the chance to. However, we hope that everyone would not mind if we don’t play the game well~!

T-ara: Actually, we already have our characters in WOWS, Jiyeon is the Yamato (Japanese battleship)! Every time Jiyeon plays as Yamato in WOWS, she will be really into the game. She’d shout and ask us to follow her lead and charge into battle. But Hyomin would tends to end up having the best score in the end. Actually, Hyomin is pretty good at every game she plays too. Nevertheless, Jiyeon’s courage and competitive personality really match well with the Yamato.

T-ara: Hyomin! Hyomin is really, really good at WOWS! She’s really good at many games, it’s like she has a talent for gaming. We normally need to follow her lead to victory.

17173: What do you think of gamers? What kind of impression do you have of them?

T-ara: Gamers are pretty adorable, haha, gamers would have common topics to talk about when they hang out together, chatting would be more enjoyable. They can ridicule each other whenever they play games together too. But gamers must take care of their eyes!!!

17173: Despite facing a lot of pressure from work, T-ara is still able to face everyone with a smile. So how do you all normally relieve stress?

T-ara: There are many ways of stress relief, like playing games, exercising, maintaining quality sleep, watching television, hanging out with friends, to name a few.

17173: T-ara must have seen other Chinese girl groups too, what do you think are the differences between Chinese and Korean girl groups?

T-ara: We don’t think there is a huge difference but we guess Chinese girl groups are cuter than us.

17173: There are a lot of male users on our site that like T-ara a lot, what do you think are your attractive points?

17173: What plans do T-ara have which everyone can really looking forward to?

T-ara: Everyone can expect and look forward to see more of our collaborations with WOWS in the near future. We are really looking forward to it too!

T-ara: Thank you everyone for the support, we will continue to work hard to present even more good music to everyone~

T-ara share of recent and future activities in interview with K-Wave magazine
Next
T-ara as a trending girl group in China, plus to appear large-scale Spring Festival Gala