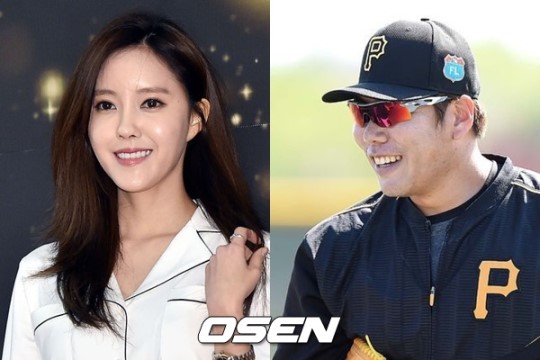 Is Hyomin dating MLB player Kang Junho? The answer is: NO!

[Update]: Hyomin spoke to TV Report to speak about the reports that came out today. Hyomin stated she is currently in Vietnam for T-ara schedules and was confused when she received frazzled contact from Korea.

Hyomin said, “Kang Junho oppa and myself are just in a friendly relationship. It is different from the article’s reports.”

She also mentioned she was in the middle of preparing for her second mini-album solo comeback. “I will work hard to be prepared to show off a good luok,” Hyomin said.

It was reported today that Hyomin and Major League Baseball player Kang Junho have been dating since January. Is it true?

It was originally reported that Hyomin and Kang Junho first met in September of 2015 when Hyomin threw the first pitch for the Pittsburgh Pirates baseball game in the United States. The two quickly became friends and toured Pittsburgh together including the zoo, amusement park, and other sights in the city. Kang Junho entered a period of rehabilitation because of a knee injury he suffered and he was in a bad state shortly after. Hyomin was there for him over phone calls and SNS. Naturally, over the course of the next few months, the two became closer and closer – like brother and sisters. In January of 2016, the feelings changed from friends to more serious. It is said by ISPlus that the two began dating three months ago in January and pursued a long distance relationship with him located in the United States and her in Korea.

When asked for Hyomin’s agency MBK’s response they said they will confirm with Hyomin who is currently in Vietnam with T-ara. Shortly after, they verified with Hyomin that the two are in fact NOT dating.

MBK states, “Hyomin is not dating baseball player Kang Junho. It is true the two have a close friendship as brother-sister but they are not lovers.”