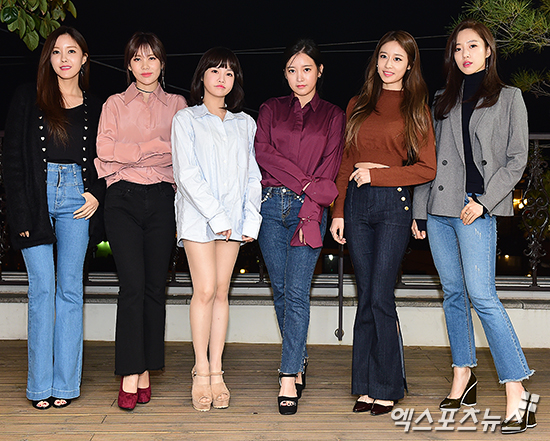 Just like that, T-ara is a girl group that has been around for almost 8 years. Many idol groups have suffered the ‘7-year jinx’ and went through changes within and outside the groups. Meanwhile, T-ara who had been through all sorts of hardships (even before the 7-year mark) captured a lot of attention and concern.

In an interview about their recently planned comeback, T-ara revealed facts about their contract status with MBK Entertainment, their love towards the team and their sense of responsibility.

“Other idol group peers who debuted around the same time as us have already went through contract termination changes but our contract is still about a year from expiration. The contract expiration dates of the members are not very different but we recently discussed it with our company and we have set a (new) date for the contract termination,” T-ara honestly spoke.

Also, T-ara mentioned Shinhwa who have been maintaining their team for 19 years now and said, “we will indeed not disband this group called T-ara. We wouldn’t be able to decide this if even one member’s heart felt differently. All 6 of us want to maintain this T-ara team.”

Especially Soyeon, she expressed her heart and said that regardless when or where the members are, even if they were to go back to leading ordinary lives, as long as the fans ask for it, they would want to gather once again as T-ara and perform whenever.

Hyomin said, “honestly, there are times where we’ve had a ‘T-ara love-hate relationship.’ There were times of difficulty and hatred but we can never throw (T-ara) away. The members all understand that they can’t throw this team away and have gained more sense of responsibility. T-ara is everything in our lives. So we hope that we can go a long way with T-ara’s name. The group’s upcoming new song TIAMO is not T-ara’s usual conceptual image; it’s a song where their usual strength is significantly reduced to show T-ara’s softer sides. Additionally, the lyrics of TIAMO contains a thankful heart towards a beloved person but the members are singing this song to express their hearts towards their fans.

Qri said, “when we were rookies, we were busy like crazy so there wasn’t much free time for us to stop and feel the love from our fans. But when we had free time, we would think of our fans a lot. We get more strength when we think of our fans.” Soyeon added, “because our fans want to get us first place on music charts, they stream our music. We know that very well. Even if we don’t get first place, it’s fine. Just our fans’ intention and hearts are enough to make us happy and thankful.”

When we asked T-ara about what they hope to get from their company, all 6 members said that they wanted a second full-length album that contained “T-ara’s colours.” Eunjung said, “we want to release an album that is of the highest level and songs that anyone who hears them would say that these are T-ara’s songs.” Hyomin added, “we released 18 to 19 albums but only one of them is a full-length one. We want to release a second full-length album with good choreography and songs in the first half of next year.”

Meanwhile, T-ara will release their new song TIAMO on various music sites at 12 AM on 9th November and make their comeback after about 1 year and 3 months.

T-ara recount their 7 years together as a group… “We have no thoughts to disband.”
Next
T-ara share their thoughts on junior groups, “Twice and GFriend? We’re not thinking about winning.”