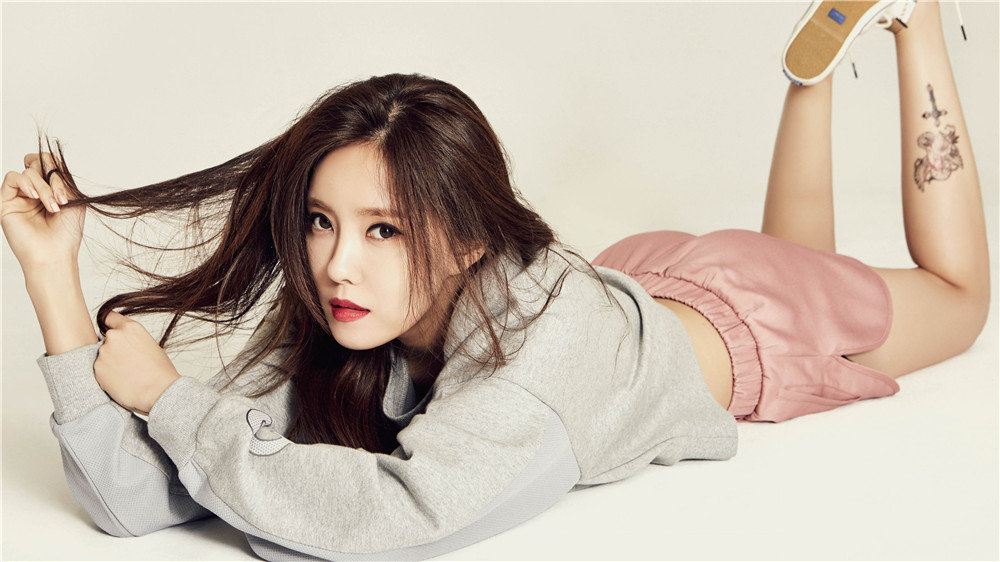 You released a new album. You’re used to solo promotions since it’s your second album, right?

I have indeed become used to promoting alone now. Standing alone on the ending stage with all the other singers made me feel very uneasy, though. But, the uneasiest thing that I’m still not used to is being the oldest senior (laugh). Um, probably because there’ll always be someone bowing and greeting me everywhere I go.

What did members say after listening to your album?

They said that Sketch was better than almost every other T-ara album in terms of quality or overall value. I was so happy to hear that.

I heard that you spent a few days at the recording studio.

I would head to the studio with notebooks and pens early in the morning. I stayed even longer than the studio staffs (laugh). And I would also need to finish the visual works while recording.

Why did you put in so much effort to prepare for this album?

My company was the one calling the shots for my first solo album, Nice Body. I had to record whenever they scheduled it for me. There were many things that I wanted to do at that time but I wasn’t able to express my opinions because it was my first time recording a solo album. I don’t mean to say I was unsatisfied with the album but I feel like I had to overcome the obstacles that I faced before. Even if my album is not as popular as before, I wanted to try doing something that I really wanted to do. Maybe it’s that kind of thought? So I’m actually very satisfied with this album. I had never given away T-ara’s albums to friends before but it seems like I can actually give my second solo album as a present.

You didn’t give your friends previous albums, was it because you were not satisfied with them?

It’s not whether I was satisfied or the quality of the album. There seems like there isn’t a T-ara album that I could confidently say, these are songs that I can actually sing, and I’ve put in this amount of effort so that I can express these songs in this way. So I produced this new album to show that. Girls will save beautiful pictures or useful information when they see them, right? There was this one day when I went through my folders of my favorite pictures. I saw a folder with pictures of me during album promotions, but those pictures present an image of me that is far from the ones I’d like to show everyone. If I were not a fan, I probably wouldn’t like that image.

You must have thought this through very much.

I tried looking at myself in an objective manner and thought, “it must be something that makes me likable, but what and why?” Therefore, before I started producing this album, I thought about this question a lot while planning. This must have been the very important moment that led to the creation of the album.

It’s said that the visual works were done even before the songs were recorded.

I proposed my desired concept and we did the visual works first, so that no song would be a mismatch to the concept. While visualizing my desired production, I tried my best to achieve a result that is as close as possible.

It’s said that there are even a few self-composed songs in this album.

I feel that even if I might be lacking in song composition, it just felt right to try it, so I did it. Initially, I planned to compose only one song but somehow I composed another during  spare time. The second song came out well and received good comments so I decided to include both songs in the album. I’m still lacking but I’m earnestly learning now.

You must be very pleased to have this album released after you spent so much effort, right?

I thought I’d be very pleased, but I wasn’t. It was more of a mixed feeling of being pleased and still a desire for something. That kind of desire came from the possible fact that there were many people who did not listen to the album because they thought that Sketch would have a similar concept to Nice Body. This made me feel a little regretful in that respect, and that’s why I also felt desire, a desire for these people to listen to my album. On a side note, I didn’t realise that there would be promotion schedules right after the album release. It feels like I’ll have active schedules my whole life (laugh). At least when I look back in a few years time, I’ll be able to say, “I actually produced such an album.”

You seem to have an image that is unique to “Hyomin.”

I’m usually very busy as T-ara’s Hyomin. Most of the time just busy with the schedules arranged by my company. But of course, I have some time to myself as well. I spend most of this spare time trying to understand a lot about myself, that’s probably why I’ve developed a unique “Hyomin” image. Actually, I was fixated with what my CEO said to me, “seems like you want to release an album, right?”

What are your feelings having debuted for almost 8 years now?

I’m seeing a lot of unfamiliar girl groups whenever I turn on the TV. There was one day where I turned off all the lights and grabbed a lot of snacks to watch TV. Produce 101 was airing that day. It was very interesting and everyone looked very beautiful as they worked hard. I think I was like that once too. But when I finished watching the show, I realized that I ate up all the snacks and was very disappointed in myself (laugh). After seeing how those girls put in so much effort, I felt like I had to work even harder too.

I’m actually embarrassed. As a senior, I should be someone who have traits that are worth learning. But if I were to continue living like this, I’m afraid I might become a senior who has nothing that deserves learning from (laugh).

What’s the secret to T-ara’s immense popularity in China?

T-ara’s music seems to be the secret. Our music seems to have unique and classic melodies. Sometimes, we would joke that we could have done this in China when we were younger. Compared with other K-Pop singers, our lyrics seem to be much more matured. Chinese fans seem to be attracted to that.

Have you ever thought about releasing a third album?

After producing this album, I thought to myself, this album seems to have overdone it to the point where I might only be the one that is satisfied with it. I’d want an album that is able to attract and cater to a larger audience, to display a beautiful image of a female solo singer. Maybe by not putting too much emphasis on beauty and trying out a charismatic concept that could drive people crazy? I’d have to put even more effort into the overall style and concept or the choreography and performance. I want to become an exceptional female singer!

No matter what we do, we have to constantly aim higher and higher.

Yes, no matter what, I tried my best, so I have no regrets.

And you did it very well.

Based on some people’s standards, they might think that I’ve not done well. But I think it’s more important that I had tried my best and invested a lot of my passion and energy. Without having high hopes about the prospects of a singer’s life, I produced this album and realized that I could actually do something like this. Nevertheless, I’m very happy and satisfied that I managed to persevere to the end without giving up halfway and eventually completing it.