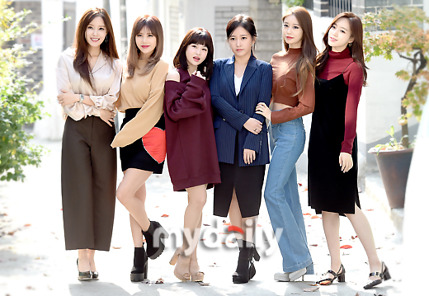 T-ara on Kim Kwang Soo, “he is our immediate leader, we re-signed twice.”

Girl group T-ara’s new song won’t be an unusual and comical image but more of a feminine and calm concept. It is different from the image T-ara used to emphasize on so it’s awkward but it is a strategy to use an ordinary concept that differentiates them from others.

But then again, after T-ara debuted in 2009, they did kitten, robot, Native Americans and many different concepts and choreography. Honestly, it is hard to see other girl groups who have attempted slender and cute concepts, or feminine and sexy concepts, do it as well as T-ara.

After 1 year and 3 months, T-ara is knocking on the Korean stages’ doors again. They decided to go through pains to perform a lyrical song on stage. After their debut, their new song TIAMO marks their first time having activities with a medium-tempo lyrical song instead of a fast-tempo dance song.

“All this while, whoever sees the extension of what T-ara has shown would just think that this is a T-ara-ish concept so we had our worries of what to do. But we wanted to see how it would be if we were to try something that we had never tried before in the past, so it became a challenge for us. Other girl groups have tried this kind of calm and quiet choreography but we’ve only always tried the unusual concepts, you know.” (Eunjung)

“We wanted to do this kind of concept very much so it’s really great that we can do it now. It seems that we can now show a more girl group-ish kind of image. The song and choreography are a good match so it’d be good.” (Boram)

T-ara expressed their love and faithfulness towards MBK Entertainment’s CEO Kim Kwangsoo. They had their ups and downs but T-ara emphasized on CEO Kim Kwangsoo’s credits for giving them the opportunity to reach this position. All this while, they were steadily having activities and re-signed their contract twice. While other girl groups’ contracts expired and disbanded, T-ara firmly maintained their team and that was actually very much influenced by their ‘contract expiry date.’

“Our CEO is actually stronger than the 6 of us. It’s a structure where six of us are below him. He’s like our leader. That’s why although all the members have always pretty much accepted his opinions, this seems to be the right thing. The two re-signs happened in the middle of schedules. Once was during a tough time, the other was when it was better. That’s how we got to where we are right now.” (Soyeon)

T-ara confessed that their upcoming activities are to engage with their fans actively. They would not only start Korean activities after a long rest, different events are also being prepared.

“Winning music shows and charting is not important and we don’t have a specific goal. If we cared about getting first place for sure or great results, we would have chosen our ace ‘funky’ music again, right? But we wanted to have a little more comfortable promotion this time. Interacting and responding to fans while making sweet memories is our first priority.” (Hyomin)

T-ara talk about having panic attacks, “they must have hit each one of us at least once.”
Next
T-ara on their past and future, “even when wanting to throw the team away, it’s still precious to us.”