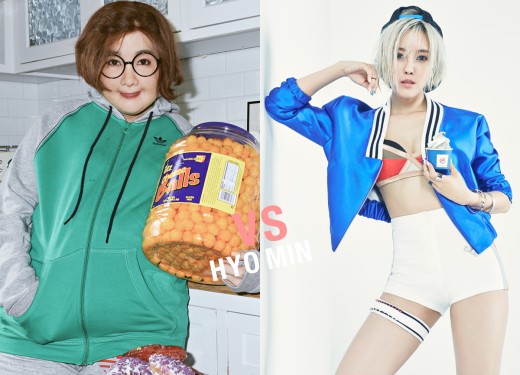 On the 24th, Core Contents Media released two side by side concept pictures of Hyomin. On one side, Hyomin is over-weight and “gained 200 pounds” with the help of special makeup effects, and on the other side, Hyomin is her natural self with a perfect body alte osx versionen herunterladen.

The agency said, “Hyomin likes to be comedic, so she will have both appearances in her music video for a fresh and funny music video.” Hyomin was in special makeup for hours to get the “brand new look.”

Hyomin’s first solo song “Nice Body” will have two teasers – a version rated 15+ and a version rated 19+ word for free 2010. Both teasers will be available ahead of the release on July 2nd.

As previously revealed, Hyomin is working with Brave Brothers for her title track and Loco will be featuring in the song melodien gratis downloaden.

Share Post
Previous
Jiyeon makes a surprise appearance as a new character on MBC’s Triangle
Next
Jiyeon’s appearance brings “Triangle” the highest ratings yet.. Will she return next week?

This year, T-ara is welcoming their 10th anniversary. Having been loved as T-ara’s Hyomin for the past 10 years, solo singer Hyomin begins her 2nd chapter through a new agency. In an interview recently conducted at a cafe in Sinsa-dong, Hyomin made time to talk frankly about welcoming T-ara’s 10th anniversary and her solo activities fortnite download s7. 4 months…