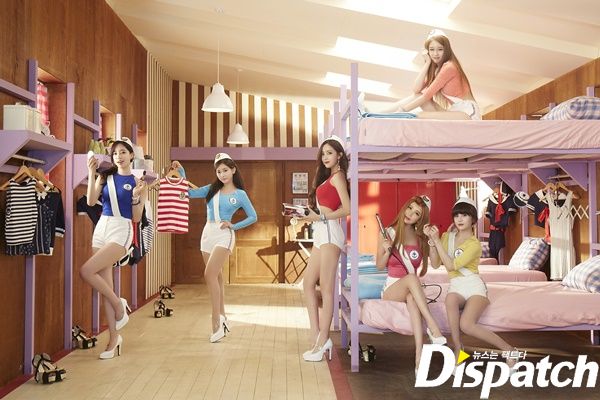 T-ara have absolutely gone crazy. T-ara is having their summer comeback with crazy visuals, bodies and dance. Dispatch shares some pictures during their MV filming on 25th of July at Namyangju.

1. Concept: Absolutely Retro
Once again, T-ara’s new song will have a retro feel to it. A funky rhythm within brass sounds; it’s a song composed by hit-song maker Brave Brothers.

The MV is a story of T-ara in a navy school. It’s something like a T-ara version of 200 Pounds Beauty. A “T-ara Contest” flyer had sealed their fate. After discovering the contest, they decided to transform together!

2. Visuals: Absolute Marine Look
You will be seeing the thighs of the young girls at the navy school throughout the MV. They will be showcasing a variety of marine and sailor looks during this comeback.

3. Bodies: Absolutely Nice
Their bodies are also crazy! All the members underwent a diet for this comeback and have been doing intensive weight training to get toned bodies.

4. Choreography: Absolutely Disco
Visuals – checked! Now on to the choreography. It will be an addictive dance like Bo Peep Bo Peep and Roly Poly. Have you seen it before?

a. Stab/Poke Dance
This is the highlight dance. A reminiscent of the retro disco dance, right? Lightly rocking their hips while stabbing their index fingers upwards.

b. Hip Dance
It’s a sexy dance? The hip dance puts emphasis on T-ara’s feminine beauty. First, stick out and point your thumb upwards while swaying your hips sideways~

See the full set of the 35 behind scene photos in our gallery!