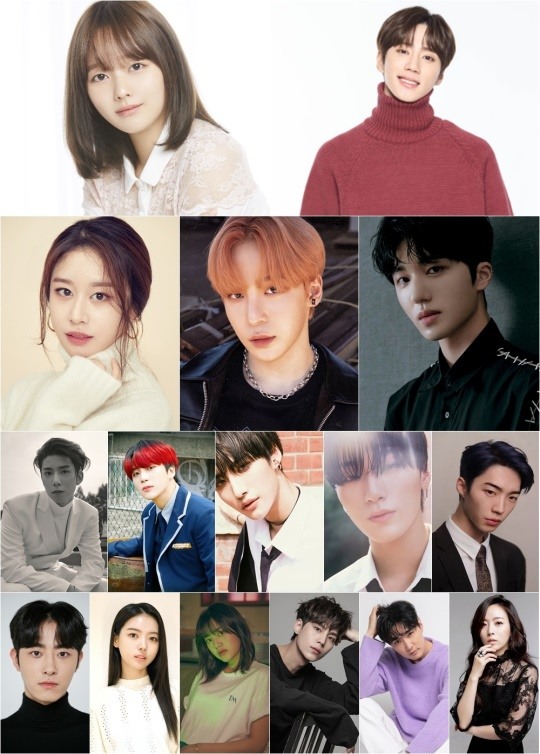 ‘Imitation’, directed by Han Hyunhee, and written by Kim Minjung and Choi Sunyoung, is based on the popular Kakao Page original webtoon of the same name. Since its first serialization in 2014, the webtoon has accumulated over 430 million views, 3.73 million Kakao Page subscribers, and 600,000 registered comments.

Jung Ji So, Minseo, and Lim Nayoung have been cast as members of the girl group Tea Party. Jung Ji So plays Maha, the center of the group, a happy virus with an innate sense of dance. Minseo will the play the role of Lea, the leader of Tea Party, and Im Nayoung will play Hyunji, the visual and former center of the group.

Jiyeon will take on the role of Larimar, the top selling female soloist in the idol world.

Lee Junyoung, Chanhee, Jongho, Hwiyoung, Yuri, and Ahn Junghoon have been cast as the members of the idol group SHAX. Lee Junyoung plays the role of Kwon Ryeok, the center of the top K-Pop group who dominate various charts. Junyoung is a complete with his skills and looks, and unexpected clumsiness.

Chanhee will play the role of Eunjo, a former member of SHAX; Jungho will play Hyuk, the youngest all rounder; Hwiyoung will play Lee Hyun, the vocalist and producer for the group; Yuri will play Dojin, the member in charge of variety; and Ahn Junghoon will play Jaewoo, the leader.

ATEEZ’S Yunho, Seonghwa, San, and Boys’ Republic’s Suwoong have been cast as members of the group Sparkling. Yunho will play Yujin, the center; Suwoong will play Hyun Oh, the former center; Seonghwa and San will play Minsoo and Seyoung respectively.

Danny Ahn will play the CEO of Tea Party’s agency, and Shim Eunji will play reporter Byun who tracks idols every move.

The production staff from KBS has said, “we have met with the hot rookies of the present, and the national idols of the 1st and 2nd generation. Please look forward to the synergy of actors who play with their charming characters with their own unique colors. We will visit the dramatic idol world of Imitation and its unique colors with sincerity like never seen before and like a special gift.”

Eunjung cast in lead role in upcoming movie ‘I Will Song’ alongside Gu Won
Next
Eunjung to play lead role in KBS 1TV’s new daily drama, Fooled in a Dream