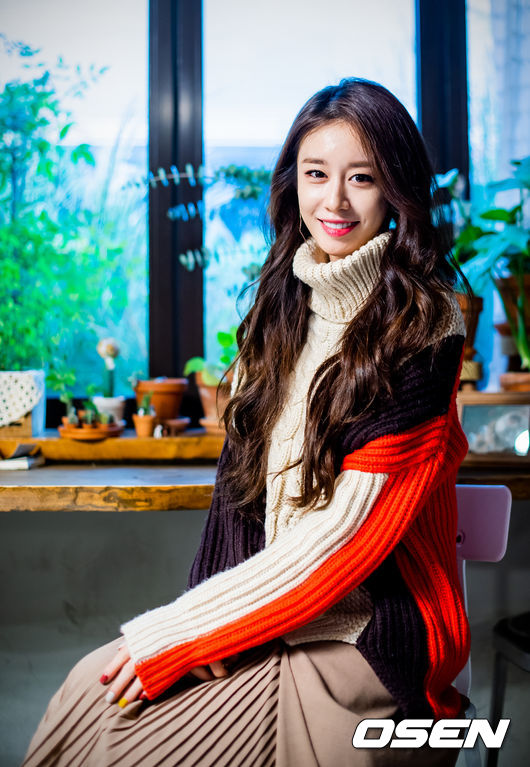 T-ara member turned actress, Park Jiyeon, certainly made a strong impression with viewers through the KBS drama ‘I Wanna Hear Your Song.’

‘I Wanna Hear Your Song’ is a mystery rom-com about a timpanist, played by Kim Sejeong, who lost her memory on the day of a murder and is searching for the truth with the help of a strange man.

Jiyeon plays the “queen of push-and-pull” and “femme fatale” violinist Han Eunjoo. The naturally gifted 2nd violinist of the orchestra with good looks and a spicy charm, she is the romantic interest of many men, a “queen of dating” heart breaker and push-and-pull player.

However, she did not give up on singing. “Recording in progress with a Chinese company. It’s scheduled to be released in late November. Within this year for sure is the idea. I couldn’t decide on the title song. Our staff took a vote,” she said and laughed.

As for T-ara’s reunion, “we’re trying our best. It’s not easy because we all have our own schedules, but I hope the time comes quickly. We’re trying our absolute best. I talk to the members often but it’s hard to make time. This is the problem we face as seniors. Our heart and thoughts are the same but it’s not easy,” she said. T-ara recently celebrated their 10th anniversary, “on the 10th anniversary, we greeted everyone on V Live to congratulate ourselves and went bowling. Rather than a special event, we played by ourselves. I often meet and stay in frequent contact with the members. I feel lonely when I’m working alone. I often contact the members and say ‘I’m bored’ or ‘come see me’,” she said.

“I’m grateful to celebrate T-ara’s 10th anniversary. I’m grateful I could give our 10th anniversary greeting to my fans. I’m thankful to my fans, there’s nothing I can say but thank you. I’m here right now because of my fans… I have an affectionate relationship with my fans.” (Quoted from MyDaily.)

When asked if there is anything special that was said after 10 years, she laughed “just ‘good work’, ‘I enjoyed watching you’, we often talk like this. We’re close so we’re harsh without hesitation.”

She said about T-ara, “my youth. My happiness and pain. I’m thankful looking back at the memories. I’m thankful there are people who recognize me even now. I miss the members I endured the time together with. The last time our name was called, I couldn’t express myself properly. There are so many happy moments. I was happy to be T-ara and who I am now,” she said as her eyes became red from tears.

Recently choreographer Bae Yoonjung said on a radio program, “in T-ara Jiyeon’s case, her dance line is pretty. She’s quick to learn.” Jiyeon said, “I heard. I felt so happy. I feel like a good student because I was acknowledged by my teacher. When we met again in the practice room, I wanted to do even better,” she laughed. In regards to her character on ‘I Wanna Hear Your Song’, “Ha Eunjoo will say what she wants very confidently. Her costume, accessories, hair, style, etc. I paid a lot of attention to her appearance. There are a lot of people who think I have Eunjoo’s style of personality, but not at all,” she laughed.

“I played a lot of student villains, this time I played an adult villain,” Jiyeon laughed, “while filming, it was a little hard this time because there were many hitting scenes. Of course those who were hit had it harder and there was a lot of cursing too. That sort of thing was a little difficult and I always apologized afterwards.”

“In the past, I thought I wasn’t affected by the comments, but I wasn’t okay. It left a scar. It hurts every time I look. So this time, I didn’t look. I tried to only look for my fans who supported and gave me strength. When I’m acting, I only listened to their words. I couldn’t do it (look up comments) if I didn’t want to be shaken.”

“I hope you can enjoy my acting now,” Jiyeon said, “it was like I was trapped as T-ara’s Jiyeon. I want to break through. Now I want to show you and challenge many things. “It’s been a while so I was anxious at the first meeting and said ‘it’s been a long time, please help me a lot. I felt happy to be out in the field after so long, and even though it’s over there’s still a lingering. I didn’t realize the drama was over. There weren’t many scenes with all the actors together so it wasn’t easy to get together,” Jiyeon regretfully said.

Jiyeon further added, “my confidence hit rock bottom. Everyone has a slump and I seem to have suffered one for two years. This drama pulled me out of it for the first time.  Filming went well so I think there’s going to be a lot of memories.”

“In fact, before this drama, my hiatus was a dark and scary time. If I was fenced in for 10 years, it’d be even scarier. I didn’t have confidence in anything. It was good for me come out and meet the actors and staff face to face and to laugh and talk.”

Jiyeon has also started a YouTube channel to meet with fans. “I wanted to communicate with my fans and show more of my every day life. During the drama I started a channel. I did the editing in the car while on the move. But the busier my schedules became the less attention I could give it so my fans became sad. I plan to start again right away.”

“Thank you for remembering me after a difficult time. I’m thankful to feel like this again. I hope it stays this good 10 years later. I wish to tell the fans I am here now because of them.”

Boram and her mother, Lee Miyoung, share fashion advice and their personal healthcare routines
Next
Jiyeon talks about her new character, her distressing two year hiatus, and her relationship with T-ara, her company and fans